How to Deal With Haters and Trolls on Social Media

It’s a growing phenomenon and, oddly, gets worse the better you’re doing. These days, there’s always someone lurking around your social media channels, waiting to unleash their twisted version of reality from behind the safety of their keyboard. 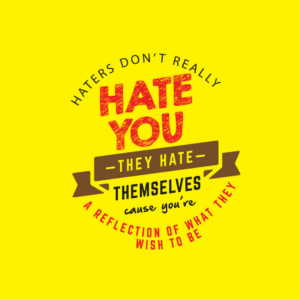 Fortunately, these haters or trolls are a tiny minority, but their negativity can catch us off guard – we’re all human and this stuff can really hurt. You need to be on the lookout and ready to act.

Here’s how I deal with haters and trolls:

When I see a snarky comment, the first thing I do is give a little mental fist pump.

That might seem odd, but I’m thinking, “Whoa, I’ve obviously arrived, I’ve got my own pet trolls!” To my mind, that’s way better than getting angry, upset or fearful. Here’s why:

Only YOU have dominion over your mind. Only YOU decide whether to let other people sneak in and get to you.

Why should you allow some emotionally bankrupt commenter to affect you? It’s up to you to make sure you don’t give them that power over your feelings.

In my Facebook group, I operate a zero-tolerance policy. If anyone is rude or disrespectful to any group member, if they post inappropriately or if they spam, they’re banned. I don’t enter into any conversation about my decision and when they’re out, they stay out.

Here are a few examples of comments I’ve received over the last few months and my responses to them.

After I posted a new article to my Facebook page, I got the comment, “You shouldn’t be advising other people on social media, you clearly don’t know what you’re talking about.”

When I first read that, I tried my best not to let it sting and then checked the person out. Their page had 43 Likes. Mine has more than 17,000. I was pretty comfortable with which one of us knew what we were talking about. Comment deleted, troll banned.

I spend a lot of time advising people on how to use social media, how to build lists and how to grow their businesses through great marketing. So when I saw the comment, “Your spelling is incorrect”, I was mortified.

“Oh goodness, I ran it through a spell checker, what’s happened here?”, I thought. As it turned out, their “incorrect” spelling was just a minor difference between US and UK spelling convention.

Clearly, there’s not much I can do about that. But it made me wonder, why is this person on my page? Do they want to learn anything from me or are they just here to nit-pick? I didn’t ban this transatlantic pedant, but I assigned them a mental yellow card.

And then there’s my all-time favourite (or should that be favorite?) troll comment. It read simply, “Your hair looks like you escaped from the 80s.”

That literally made me laugh out loud. If they had any idea what I’d got up to in the 80s, they’d realise just how lucky I was to escape from there at all! With a smile on my face, I binned the comment and banned the idiot. 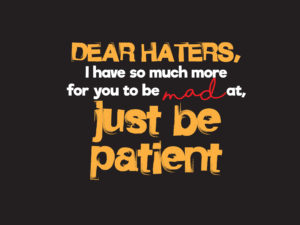 Here’s how I suggest you handle haters and trolls:

If you’re less interested in being trolled and more interested in using social media to build your client base, come and join our discussion! https://www.facebook.com/groups/SupportYourBrilliance/